How Zimbabweans persuaded diamond companies and government to listen 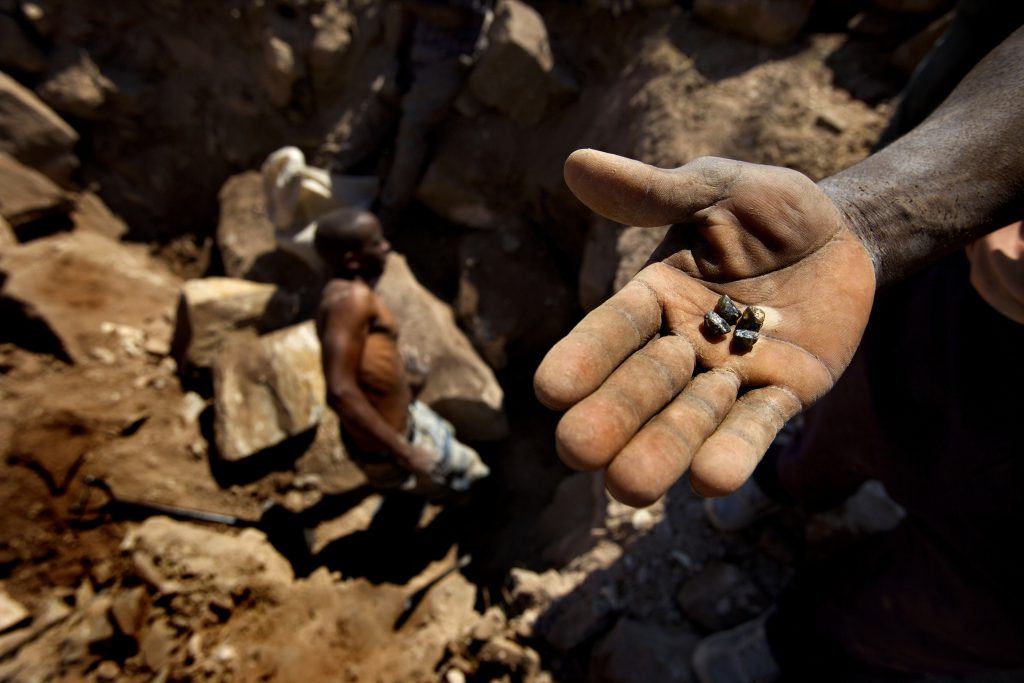 A diamond panner attempts to sell a diamond behind the backs of the military and police who demand all sales go through them.

Communities around the diamond fields of eastern Zimbabwe have bolstered their arguments for tax justice by putting data front and centre.

In the predawn hours of 18 July this year, some 200 people breached the fence of the Zimbabwe Consolidated Diamond Company (ZCDC) and descended upon the main diamond sorting room. They wielded wrenches and machetes “while singing threatening songs,” according to the state-run Herald newspaper. The security guards warned them to leave, then fired warning shots, then fired directly into the mob. By the time they dispersed, at least two people were injured and one man lay on the ground bleeding to death.

The Herald, a staunchly pro-government outlet, relied mainly upon a single source for its report, and other details are murky. But the shooting is consistent with years of violent confrontations involving illegal miners, private mine security and government forces in the resource-rich, impoverished eastern province of Manicaland.

In one 2008 massacre, a military helicopter swooped over the heads of hundreds of panners mining without permits, scattering them with machine gun fire as barking attack dogs hunted them. “There was a man next to me, he had been digging near me, and the bullet went right through his head,” one miner told The Guardian. “A dog ran for me but there was this woman, she was slower than me and it attacked her.” At least 214 people were killed in a series of such raids, Human Rights Watch reported.

Zimbabwean civil society urgently began monitoring and reporting human rights violations around the Marange diamond fields near the Mozambique border. Amid domestic and international pressure, violent conflict declined, but systemic problems persisted: environmental degradation, economic inequality and, at the root of it all, virtually zero accountability. (The Zimbabwean government, sceptical of international initiatives, has refused to sign up to standards like the Extractive Industries Transparency Initiative.)

Mukasiri Sibanda and his colleagues at the Zimbabwe Environmental Law Association (ZELA) — a member of PWYP Zimbabwe — realised broad, non-specific appeals to decency and good governance would not persuade corporations and politicians to change. But hard data might.

“The potential for a windfall revenue from diamond extraction did not commensurately reflect in the coffers of both national and local government,” Sibanda wrote recently on his blog, which has become a clearinghouse for information about minerals extraction transparency in Zimbabwe. “Opaqueness has been the main challenge,” he added.

That challenge garnered international headlines in February 2016, when President Robert Mugabe complained that diamond mining companies had failed to pay $15 billion in revenue taxes. “Lots of smuggling and swindling has taken place and the companies that have been mining, I want to say, robbed us of our wealth,” Mugabe said. As president, Mugabe presided over a financial system so murky that neither he nor his finance minister seemed to have any idea where the money had gone.

In November, Sibanda traveled to Jakarta to join the inaugural ranks of our “Data Extractors” — individual members trained in the technical art of identifying, obtaining and analysing financial information from governments and extractive companies. “I realised that it is important to empower communities with data literacy skills to enable them to drive the change process in the governance of mineral resources,” he said.

He brought this knowledge back to Manicaland Province, where PWYP Zimbabwe began working with existing community organisations, like schools and health centre committees, and instilled them with a powerful new mission. For all the diamonds in their soil, there was no reason their classrooms should lack books and their clinics lack medicines. Cyanide runoff shouldn’t pollute their rivers and kill their cattle. And with all the economic activity mines create, local residents shouldn’t be jobless or forced to illegally pan for diamonds, drawing the wrath of air force helicopters. 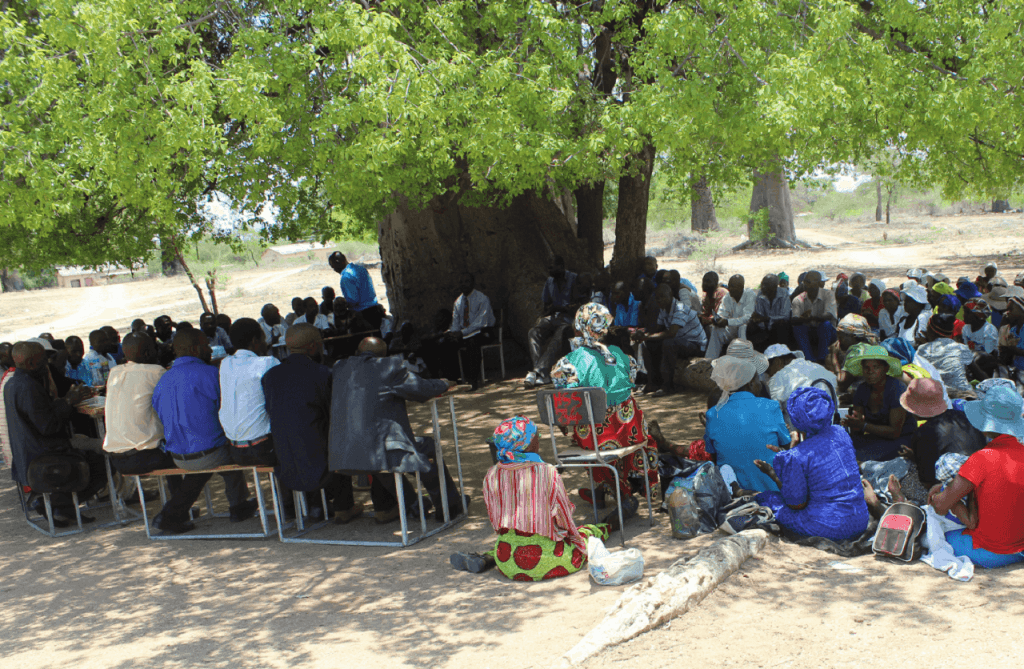 Credit: Zimbabwe Environmental Law Association (ZELA)
By backing residents’ concerns with data, Sibanda said, “we are simply trying to level the playing field.” Ill-informed, angry people are easy for companies and politicians to ignore; a united front of community leaders bearing spreadsheets are far more persuasive. The community organisations have bought into the idea, gathering in mining towns across Zimbabwe to learn about budgets, taxes and corporate social responsibility.

“Normally data is used by civil society and rarely by the communities themselves,” said Darlington Farai Muyambwa, who is the PWYP Zimbabwe’s national coordinator. “For Zimbabwe, this programme has been unique in how it managed to create interest for data at the grassroots level.”

One of those community groups is the Marange Development Trust, which lobbies public officials and companies on behalf of the residents of the diamond-producing region. “Data really helps us to do exactly what we are supposed to do on our own instead of relying on other organisations on our behalf,” said Malvern Mudiwa, the group’s chairman.
Recently, for instance, the Trust persuaded local authorities at the Mutare rural district council to share two years of financial reports. The documents were extremely vague: In a district where mining is the principal economic activity, there was no line item for revenue from mineral taxes. PWYP Zimbabwe and the Trust were forced to deduce mining company contributions themselves, revealing that the local government has “never received a cent of tax revenue from the mining companies,” Mudiwa said.

Mudiwa, a small business owner in Mutare, began rallying his local community in 2006, when diamonds were first discovered in the province. The government raced to issue permits to mining companies and cordoned off the diamond fields. But the companies failed to consult with residents on issues ranging from environmental protections to relocation compensation and employment, Mudiwa said. They also hired non-local employees and contractors based, apparently, on political criteria.

In other words, the diamonds of Manicaland weren’t enriching the residents of Manicaland. And in a country where unemployment may be as high as 95 percent, illicit mining presented one of the few sources of income for Zimbabweans in and around the region. But alongside the black market smuggling operations came drugs and crime, putting further strain on the communities.
“What we are trying to advocate for is to stop the illicit financial flows of illegal mining, and we also encourage mining companies to give employment preference to the local community because those are the people living with the effects of the mining,” Mudiwa said.

Using data, PWYP Zimbabwe has made inroads at the national level, earning ZELA a seat at the table during the upcoming national budget consultation in September. Their work, and that of other CSOs, has reached the attention of the cabinet, particularly after they pointed out that a particular export incentive was costing the government more than the income it derived from mineral royalties, a key source of national income. Finance Minister Patrick Chinamasa, who traveled to Europe last year seeking an IMF loan to cover civil servants’ salaries, “is keen to hear what we are saying,” Sibanda said. “And the ministry of mines is interested in driving investment to that sector.”

“For Zimbabwe, the greatest success is how we have made data issues relevant to communities in organising their own advocacy initiatives at the grassroots level,” Muyambwa said. “By demystifying data extraction, we’ve made it an issue beyond just NGOs but also the work of community-based organisations and community members.”
But incidents like July’s standoff at the ZCDC show how far the country still has to go.

“Mining is a huge economic activity, normally occurring in areas that are marginalised with low development,” Sibanda said. “It obviously creates a huge inequality gap which fosters illegal activities within the community. Mining companies can be proactive to make sure the benefits from mining are shared fairly with the community.”

Empowering the citizens of Zimbabwe to use data is just another way of empowering them to participate in the political life of the country. As Muyambwa put it, the government often listens to what communities have to say; after all, “they are their electorate.”

We use cookies on this site to analyse traffic and understand how you use our website. This helps use improve your experience and the content of this website.Ok, I agreeLearn more